Please click on each tab/section below to read more about each topic.

Principle goal: “. . . to provide a more efficient means of travel for motorists between Highway 103 and Highway 102, that bypasses the Halifax urban core and relieves congestion on the Hammonds Plains Road” (TIR Env. Assessment Report, 2006).

Acting as a divider between the two sections of the WA is the proposed, 113 bypass, a traffic corridor made up of public land that, for now, remains undeveloped. However, the plans remain “on the books” and interchanges and other accommodations for the 113 can be seen in all of the subdivision plans currently being submitted to HRM as well as those already completed such as Bedford West. All of the development on either end of the 113 bypass routing is being planned and built on the premise that this connector road will be completed at some point in the future.

The cost to build the 113 is estimated to be $10M/km which works out to about $100M in 2018 dollars. A lesser-priced option might also be considered, more along the lines of a four-lane street. The 113 is approved (with conditions) as a four-lane, controlled-access highway. Details can be found here.

This letter from the Woodens River Environmental Conservation Organization is typical of considerable public comment that has been contrary-minded to the construction of this highway. It provides many references to the need for unobstructed wildlife corridors.

Click on the image gallery below to see maps of this proposed Highway 113 bypass.

In 2013 HRM sold 88 acres at the southern corner of the Blue Mountain – Birch Cove Lakes (BMBCL) Regional Park to a private developer (BANC Commercial Holdings Limited). From the perspective of the Friends of BMBCL Society, this sale, adjacent to the retail properties on Chain Lake Drive in Bayers Lake Business Park, was extremely unfortunate. The subject property was the only land owned by HRM within or immediately adjacent to the proposed regional park and its sale and pending development for commercial and institutional purposes directly conflicts with the intent of the Muncipality’s 2006 Regional Plan and the 2014 plan update.

In apparent recognition of these concerns, an effort was made to minimize impacts on the abutting regional park land though the inclusion of two related conditions in the deed transferred to BANC, including Condition #11 which states:
“Applicants for construction on properties within the Property shall demonstrate to the satisfaction of HRM Real Estate  & Facilities Services, that the proposed buildings and structures and location of development, will have a 20 foot no-build wilderness buffer along parkland border.”

As well, Condition #13 states:
“ Existing vegetation shall be retained wherever possible. . . . Development shall minimize the removal of native vegetation where possible. . .”

Read more here and see photos of the effects.

The existing trails within the WA and the adjacent lands are generally in poor condition. This is largely due to heavy use and no maintenance over a long period of time. Degredation, poor drainage, questionable routing and lack of any trails development plan have all contributed to the current state. However, the trails continue to be used and enjoyed year round by those with the ability to navigate what can best be described as challenging conditions.

NOTE: Provincially-designated wilderness areas typically do not have any managed trail systems. Most hiking trails on all sides of the BMBCL are the result of private citizen initiatives or have been in place for many years before the WA was created.

In 2015, a conceptual trail plan was completed by a committee made up of representatives from Halifax North-West Trails, Canadian Parks and Wilderness Society, and the Maskwa Aquatic Club. For many reasons, that plan, which was conditionally approved by NS Environment, remains on hold. As of February 2019, there is no trails group ready to revise the plan and take it to the next level.

The complete plan can be found here.

“Wilderness Parks are nature parks which are specially designed to protect an area of land and/or water, support natural processes, species and habitat; and where human activities are primarily passive (e.g. hiking, nature interpretation and appreciation), and do not compromise ecological function.” …Halifax Regional Municipality 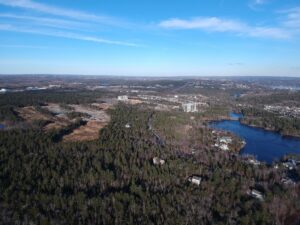 First off, it is important to remember that we are dealing with two land areas that are defined separately but for the regional park, will be difficult to differentiate since the boundaries will be shared.  Those two entities are the existing, Blue Mountain – Birch Cove Lakes Wilderness Area (WA), most often referred to as the “back country” and, secondly, the lands surrounding the WA or “front country”.

However, the “front country” description is not completely accurate as the WA shares its boundary in many locations with existing development such as seen at Bayers Lake and behind the Maskwa Aquatic Club. The interior of the WA offers the best prospect for the long term sustainability of wildlife habitat and overall ecological stability.

The only land recognized as being actually added to what will make up the regional park is the Hobson Lake block, purchased by Halifax Regional Municipality (HRM) in January, 2018; the Barrett lands purchased in 2019; and the Armco property, also added in 2019. No overall park planning is known to be underway and no improvements such as trail construction or improvements have been made to any of these properties. HRM’s description and status of the proposed, regional park can be found here.

The WA is roughly divided into two parts, one formalized in 2009, the other in 2015 as in the two maps below. A new map was released in January, 2019. Administration of the WA is the responsibility of Nova Scotia Environment. Yet to be determined is how the two lead organizations (HRM & NS Environment) will coordinate the management of the total area.

A historical backgrounder on the formation of the WA and the regional park can be found here. 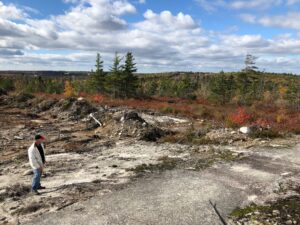 If that “protection” is to be sustainable over the coming years, how much development will be allowed in the lands immediately adjacent to the WA and if so, what will be the impact? Should developments be allowed to clear cut right to the the boundary lines in the Wilderness Area or HRM parkland? In our province, no other WA is being subjected to the levels of human encroachment more than that seen in the BMBCL. From all sides, housing and commercial development has occurred right up to the WA boundary.

This encroachment is easily seen on any of the newer maps as well as on the ground in locations such as Bedford West, Bayers Lake, and Kingswood subdivision.

Numerous empirical studies have shown that for the “biological diversity” to survive within a protected area requires not only the so designated lands but also the apron properties that act as buffers to the core.